Maria has been a home health aide on the south shore MA for nearly 20 years. She loves her work, feels that she’s making a real difference in other people’s lives, and speaks about her patients as though they were family.

“It’s really nice to walk into a patient’s home and know that he or she has been eagerly waiting for me to arrive,” she says. “Since I see a number of seniors with mild to moderate dementia, it often means getting them started on the day ahead: helping them get washed, groomed, dressed and fed, and providing them with a social outlet. 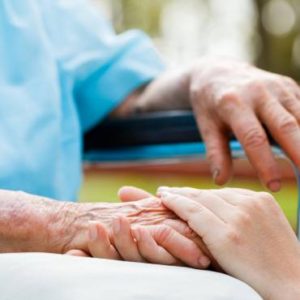 Meanwhile, I’ve also had many patients without any cognitive impairment, who can care for themselves but really depend on me for their social interaction. In some cases, they have no family living nearby and might otherwise go days without seeing or talking to another human being. They’re fiercely independent, and want to stay in their homes as long as possible, but they’ve outlived their friends and feel very much alone.”

Maria often serves as the eyes and ears for adult children who may live hours away from their elderly loved one. “Long distance caregiving means that even if the children are really concerned about mom or dad’s well-being, the truth is that they’re not there to make sure they’re eating properly, taking their medication, or being mentally and intellectually stimulated, which everyone needs regardless of age,” says Maria. “This becomes the job of the home health aide.”

As a fringe benefit, Maria says that she has even become close at times with her patients’ pets. Take the case of an elderly woman named Shirley, who lived alone with Max, her Labrador Retriever.

“I’ve always been more of a cat than a dog person,” says Maria. “Yet, I really fell in love with Max. When Shirley died, the family (who lived in another part of the country) would have had no choice but to put Max down. Even though I had never owned a dog, I told them that I would take Max. He stayed with me for six years, until he died at 14. That was five years ago and I still miss him to this day.”
Her most memorable patient, says Maria, was her very first. Esperanza, who had Alzheimer’s disease, lived with her son and his family. Since both her son and daughter-in-law worked long hours, Esperanza could not have lived at home without the care of a home health aide. She and Maria formed a strong bond. The patient always referred to her home health aide as “Socia.” The elderly woman never learned Maria’s name, but beamed every morning when she walked through the front door.

“Esperanza’s short-term memory was very poor, and her memories were all in the past,” remembers Maria. “She still thought of her adult children as being young and that her own mother, who had died a half century before, was still a part of her life.”
Maria spent five years with Esperanza, caring for her throughout the week, until the woman died at home at the age of 97.
“I fed, bathed and dressed her,” says Maria. “Since Esperanza’s children did not speak English, I always took her to her doctors, who just assumed I was her daughter.”

Maria and Esperanza would often play cards and watch TV together.  “On warm days, we would sit on the bench in a park near her house and she would gossip about all the neighbors as they walked by,” recalls Maria. “She never knew my name, but we grew very close.”

If you or a loved one need some short or long-term help, please give our agency a call or email us.  We provide our home care services to the south shore, MA area including but not limited to Cohasset, Hanover, Norwell, Plymouth, Scituate, Duxbury, Hingham, Marshfield, Massachusetts.