According to the U.S. Centers for Disease Control and Prevention: 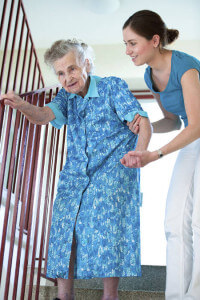 Facts like these – as well as similar stories from friends and acquaintances – convinced Mary Adams that her parents, Ron and Donna, both in their early 90s but still relatively healthy, were “accidents waiting to happen” while living independently at home. “Mom has had some heart issues and dad suffered a minor strike several years ago, and both have mobility issues, but overall they’re in good health physically and intact cognitively,” said Mary. “Yet, because they have balance issues and poor vision, I decided I wasn’t going to wait until one of them fell and broke a hip. I wanted to be as proactive as possible.”

So, Mary started to explore local home care agencies. Knowing that her parents would push back against moving to a senior living community, she figured home care was her best option. She located an agency with an excellent reputation. The owner of the agency told her that more and more families seem to be doing what she’s doing, choosing to put an aide in the home of elderly parents to minimize the risk of falls before something happens. That’s why, she said, her aides are well-schooled in spotting potential hazards in the home.

“Obviously, there are never any guarantees that someone won’t fall, even when you have someone watching them. I mean you have elderly people falling with their own family members standing nearby, and you have people falling in hospitals,” Mary said. “But, I figured an aide would limit the risk by identifying potential problems before they happened.”

That’s exactly what the aide, Rebecca, has been doing. Coming to Ron and Donna’s house for several hours every day during the week – Mary and her sister spend time there on the weekend – Rebecca makes sure that the elderly couple is fully stable before they ambulate to the kitchen or the bathroom, or take the occasional walk to the park (and only when the weather is nice).

Additionally, since coming to their home, Rebecca has taken a hard look at some of these so-called problem areas. For starters, the aide has made sure the area rugs in the living room no longer bunch up. She has her clients avoid wearing slippers around the house, opting instead for rubber-soled shoes. She had them add a non-skid bath mat to the shower as well as grab bars on the bathroom walls near the shower and toilet. She makes sure they keep a flashlight near their bed at night should they get up to go to the bathroom. New light bulbs have been put in rooms where the light was dim. And, she constantly cleans up any clutter – as often occurs when the couple’s great-grandchildren come for Sunday night dinners and leave toys around.

“Rebecca is only there a part of every weekday, but knowing she’s vigilant about their well being makes a huge difference in my psyche,” said Donna. “I feel having her there is like a good insurance policy.”

If you or a loved one has fallen or is at risk of falling, please contact us to discuss greatly reducing this risk through home care.  Cottage Caregivers is the ideal MA home care services solution on the south shore for aging senior adults and disabled individuals in Plymouth, Norfolk and Bristol Counties in Massachusetts.  Let us help to maintain their independence and dignity by continuing to live in the comforts of their own homes.